How to get a thick analogue sound

Working in music or learning to, you hear a lot of “funny” words: fat, warm… thick… organic. These descriptive words often have quite different meaning from one person to the next and that makes it kinda confusing trying to decipher what you need to know. Words like these are used because, since the days of tape and big desks, through to the time of digital DAW’s, we have lost something that we haven’t quite had the lexicon to explain, or an understanding of how to express what we mean. For a long time the digital purist protested it was all in our heads, and in some ways it was. We had lost an array of subtle distortions and effects that gave audio a certain texture, a certain human / organic nature. When you hear a song – and the sound just seems so thick, so physical in coming out of the speaker and sounds so cohesive and real you may wonder how that level of production is achieved. What you’re hearing there could be any number of subtle distortions and effects. We will cover a few ways of bringing these into your production in this blog.

Harmonics are truly wonderful; they make up the character and soul of many real instruments and hardware. They are what makes a violin and a guitar sound different, and allow us to hear the differences between different materials in the real world. (Yes, that strange place outside the studio) They are also incredibly useful when working on a mix, one of the biggest mistakes people make is hearing a track with a HUGE sub bass and slaving away trying to fit massive amounts of sub energy into their mix and ending up stuck in a mire of bogged down energy as the mix falls apart.
How do they do it? Well the trick is, they aren’t putting loads of sub in their mix, and it just sounds like they are… Sounds confusing but let me explain: if you have a strong bass and you want it to fit in and flow nicely, get hold of a distortion plugin or a foot pedal to run your bass through; what this distortion will do is create harmonics that sit higher up in the frequency spectrum than the actual fundamental of the bass, but you will find the sound is still jelled and sounds like it has a heavy sub element even when you filter or eq the subs down a bit to sit in your groove nicely. So in effect you can have less 70 Hz…..more 140 Hz but it still sounds as deep and subby as it needs to without bogging down your mix with all the low frequency energy.

When you listen back to older tracks, they often sound more real and by real I mean literally physically coming out of the speaker. (Not in a modern “so loud your ears bleed” way either). What’s happening here is the equipment used is all imparting its tell-tale signature on the sound. Little bits of dynamic compression, harmonics and other distortions are all moulding the sound in almost imperceptible ways. In the end all this adds up and adds gravity, power and musicality to your mix if done well. Often the beneficial effects of subtle distortions can be impossible to discern in isolation or A/B tests, but the cumulative effects are often stunning and strike a deep chord with the human part of the listener. We have grown up with these distortions not only in the old records, but in our real lives – nothing you hear is without some sort of distortion, harmonic or vibration.

If you’re looking to get a mix that jumps out of the speakers, is highly dynamic and has more presence, then subtle distortion and drive on your samples may be what’s missing. You can often bring more power to you mix by giving each sound a subtle treatment of Tape, Tube, Clipping your A/D or other types of distortion. Working this way is a good way to start stamping your own character on a production.

I spent a lot of time working on and developing a sample pack recently. When creating the drum sounds it was important that they be full of character, presence and vibe and offer producers an edge. There are a lot of digital ways to create interesting sounds, but to get a vibrant and musical sound, analogue distortion can be one of your most powerful tools. Sometimes it’s enough to use just a touch to give the sound a different edge, and affect the attack portion enough to sound pleasing. 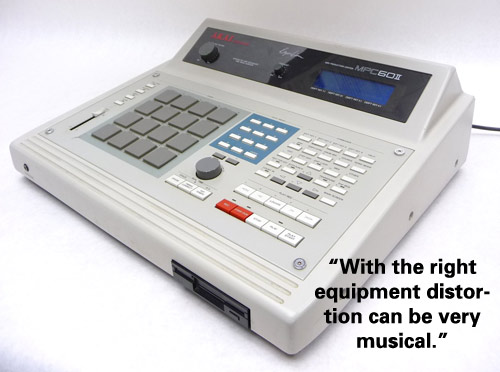 One of the tones I turned to first was the famous MPC sound. The Akai MPC units have been making their name since the late 80’s and well into the 90’s through to the present day. What set them apart is an almost Lo-fi crunchy sound most often found in Hip Hop, Rap and Electronic music like House. This sound defined a genre and set the tone for a lot of full bodied and punchy sounding music. In sampling percussion through an MPC I was able to give the sound more percussive energy and interest. Just the very act of running your samples through the machine can impart a little bit of a signature on your audio through a combination of the internal workings of the machine and the A/D convertors of your Pre-Amp taking the audio back into your project. and if you’re using the right equipment this can be very musical.

Tape has been much loved for years. The word warmth may as well have been invented to describe the loveliness tape can bestow upon your music. In professional circles STUDER machines were amongst others used to record some of the timeless hits of yesterday. What tape actually does to your audio is very complex, with the machines often having many stages, magnetic heads etc. It’s no wonder it took so long for companies making digital tools to come close to offering the tone you can get from a tape machine in your computer. When working  this tone is probably one of the most useful to have at your disposal – the warm vibey sound is really what house music is all about. I had the chance to work with the Studer A800 and the REVOX machines; each has its own character and offers slightly different variations due to different internal components and the way they work.

When you are producing the most important thing to have in abundance is choice. Even subtle choices between two different machines can help you blend things and get that physical sounding nature to your recordings. Often with tape you lose a bit of the high end off your recording as it affects the top frequencies. That, along with a slight compression of the audio, and, depending how hard you’re driving it, some harmonic distortion can really add a noticeable thickness to you sound.

As I mentioned earlier, distortion is a natural thing, it’s a physics thing inherent in everything around us and prominent with hardware components and processes. That’s why sometimes I think, with our excellent speakers and digitally perfect sound, things can sound a little cold coming straight out of a soft synth, and that makes it sound unreal because it’s never been bent to the will of the world, is unrealistic or too perfect. A good analogy for this would be the uncanny valley theory. Even the craziest sounds benefit from a humanity and physicality. You will see a lot of soft synth makers nowadays adding in analog emulation routines and code, some quite good too! We are in an age where computers are finally becoming powerful enough to start to emulate these complex interactions.

I like to think of it like this, when audio production went digital we ended up with a metaphorical DATA from Star Trek! It looked like a human and spoke like one, but it couldn’t feel emotions, and didn’t do all the tiny little weird things us humans do, it wasnt quite human. That’s why people said digital audio sounded cold, as it was missing something. We had to learn how to program-in all those little quirks that hardware did automatically and that has taken a long time.

Subtlety is the key

When working with distortion it’s important to know what your aim is, as there are two uses. If you want to go all out and make big rock music sounds, we will cover that in the next section. For everything else, all tonal sculpting and imparting character to your audio, it’s important to know that sometimes you don’t really need to hear it much, don’t overdo it. A good technique to follow is to increase your effect till you can audibly hear it, then back it off until you cannot. The effect you’re looking for is often more subtle than you think and if your mix down is tight, the smallest changes have the biggest impact.

That said, if you want to crank it to 11 and drive it into oblivion, distortion is also your friend. This creative use of distortion can often provide some incredibly large tones to work with. A good tip if you’re working this way is to have an EQ and Filter before you go into the distortion, small changes before can be magnified by the distortion and yield massive tonal changes for more creative inspiration.

What analogue distortion offers you

For a producer working in todays often overly clean, modern world, distortion offers you something that is sorely missing. It doesn’t matter if you buy a pack of sounds that have been crafted to include this element or have splashed out on a foot pedal or even a vintage tape machine. Even the latest software emulation are getting useful on modern pcs. The most important thing is you are aware of this dimension and what it adds to your music; power, physicality, presence, warmth and it will sound more natural to your listeners so subconsciously they will find it easier to connect with your music.
by Matthew Sargeant