How to avoid sidechaining

Welcome to the first in our new series focusing on the wonderful and artful world of music production. A lot of this “black art” can seem quite counter intuitive at first as there definitely is no one set “right” way of doing anything…but hopefully we can share a few thoughts which you will find useful, maybe even a little inspiring.

The tell-tale pumping and undulating sound of a side-chained track rattling out of speakers has become so widespread of late. Over the past few years, not only has the technology arrived, but the knowledge of how to use and abuse this complex production technique has spread like wild-fire over the internet and through the studios and bedrooms of the world. No longer is this the reserve of a multi million pound studio.

Let me first point out…there is absolutely nothing wrong with Side-chaining your mix, if that’s the sound your going for then more power to you. But as with all things in music it’s often about trying something a little bit different to what everyone is doing now and something that will make you stand out…rather than fit in. So here’s my little guide on a few alternative options that could offer you a very wholesome alternative.

The side-chain juggernaut first began as a way to subtly fit a mix together, a way to make that troublesome percussion part not mess up the rhythm when it hit. So the first and probably the best most uncompromising way to work with this is to really work on your EQ, find out what frequencies are important to the part you were thinking of side-chaining and cut away those that are not, to thin the sound down. Even though it’s in a thinner form it won’t sound thin in your mix as you have left the important frequencies untouched. If that’s not quite enough, you can also cut away from the other tracks to create a little hole in the mix for this part to sit in comfortably.

Still not sitting right? Fear not…

This is one of the most fundamental tools in the artists toolbox, and even easier now we’re in the magical world of computers and robots and apple iStuff. Take a good listen to your rhythm, now when working with a song it’s often not desirable for it to sound static, stale and cold….try shifting some notes around…only by a few ms at first, just to add a little human touch. This has the benefit of changing the phase relationship and the timing of the attack portion of any sounds which hit together. Often producing pleasing results, this can be very much trial and error so its worth trying anything that comes into your head and just seeing how it sounds.

Further than that you can move whole notes, or remove them! Does that bongo need to hit there, is the rhythm still strong without it? These are the kind of questions you should be thinking if you’re struggling to lock down your groove. If you can get your bass line hitting everywhere but the downbeat and you will never need to look at another side-chain again. 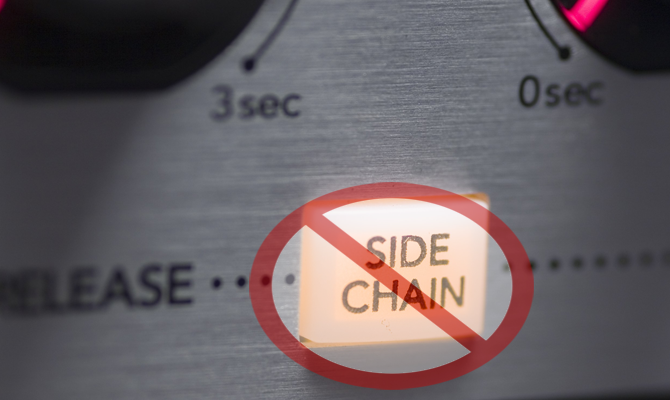 One of the hallmarks of a great track and a great mix, is its believability. Now even in electronic music that still counts 100%, and the organic nature of a great track comes from our subconscious connection to that being played by a drummer or on an instrument, with all the subtle little variations inherent to that. Taking that into account our perception of a good sound that has feeling and emotion also comes from there. When we play instruments we are not at all like machines, and we generally hit the notes with widely varying power, this is where it’s good for you to work with your velocity on all parts, to emphasise and create a more strongly defined direction to your composition…

How can this help tighten up your mix? Well you can set the problem hits in your groove to lower velocities, effectively turning them down so they are not the problem they were, and working nicely in your humanised groove.

Perception, that’s what this is all about. When stereo first came out people were amazed. What stereo does is recreate the depth and location information we use for our brains to know where the individual sounds are coming from. It’s so important you make use of this as it can add that extra sense of separation into your mixes, allowing you to hear sounds clearly even if they’re hitting at the same time. This tip is more for the mid-range, high-end and percussive items. It is best to leave your bass and kick dead centre, but that’s not a hard and fast rule if you are feeling adventurous.

Oh, and always mono-check your mix. Many clubs are still wired in mono as they have very complicated speaker set-ups.

I once heard the saying;

When working on music it’s quite likely you have had loads of ideas, and a lot of them are still in the track. It’s always good practice at the end to ask the question… “Does this part need to be in at this moment” if the answer is no, get rid…don’t be afraid.

So there we have it! I hope you find this useful, please let me know what you think in the comments!