We have a special treat for you this time round with Berlin’s crouds. These guys are killing it with recent records on Molten Moods and RFR. Definitely ones to watch so we got them onboard for a guest mix and a chat. Find out what makes them tick…

Can you tell us a little bit about your background? where are you from / how did you get going?

Hi, we are Andi and Jay, together known as crouds. We met a few years ago in Berlin when we were both looking for people to make music with. In the beginning, we were just having jam sessions in Jay’s living room. Improvised performances were the initial focus that got us started. We were playing some gigs and eventually also started producing tracks. Our debut EP came out a little over a year ago on the Munich based label ‘Neuzeit’. Step by step, studio productions became an equal part of our musical work next to the livesets. Also thanks to the pandemic we couldn’t play as many gigs as we hoped, so we kept ourselves busy with more productions. Last year, our second EP “Anshan” was released on the Berlin based label Intumi and this year we’ve released two EPs: “Outsider” on Molten Moods and “Orange Blood” on RFR Records, both labels also from Munich. Furthermore we made remixes for or collaborated with Truncate, KAS:ST, Ben Haviour, Sacha Ketterlin and Max Delius.

How would you describe your sound?

Our first release was probably what you would rather call classic techno, perhaps with some trance or psy influence. Pretty dark but maybe not so deep. At least not as deep as the tracks on later releases. After that we tried more to create our own aural identity. Retrospectively, the Anshan EP was definitely some kind of a door opener. It was more abstract, the rhythmic patterns got more intricate. We realised that ‘techno’ for us does not always mean 4-to-the-floor by default. That idea also translated into our liveset. That ‘riding squirrels mix’ that is released alongside this interview is pretty much the pinnacle of that development. That’s the most abstract we have sounded this far.
Nevertheless, on our two recent releases there are also more familiar tones – ravestabs, 909ish drums, sampled breakbeats… It’s a constant issue for us, if our sound is recognisable enough, if we should put more thought into creating a more coherent sound from track to track or if we allow ourselves to cover a broader spectrum. Well, maybe we just lack the needed detachment to judge that objectively.

What are your main inspirations?

A big chunk of inspiration comes from experimentation. At least that’s part of our idea of playing improvised. Maybe it hasn’t become clear so far that playing livesets and producing tracks are two different things for us conceptually. When producing, it’s a much more traditional workflow working within a DAW. There’s still probably some interaction between the two modes, though. For example, there have been techniques that we found while playing live which later became part of the studio production process (for some tracks at least) and vice versa. Funnily enough, working with feedback-loops and inserting effects inside the loops is one of those concepts. I mean that whole ‘liveset-is-influencing-the-productions-are-influencing-the-liveset’-thing is like a feedback- loop in itself.
When we are playing livesets there is also the chance for us to catch some of the audience’s reaction. If everything feels right and (hopefully) we are doing a good job that can be like a booster for us. That’s very fascinating about the live situation. We hope to channel the energy of the moment back into the music (again: feedback). It does not happen every time but when it happens it’s very fulfilling.

Social interaction inspires us also in a different way. We are part of the Sonic Ground collective. That’s a group of musicians, all sharing the interest for live-performed electronic music. We were hosting club events (before the pandemic, that is), organizing workshops and we just started putting out a podcast (‘Technostilleben’ – https://linktr.ee/sonicground). In a nutshell: swapping ideas and exchanging views on topics of shared interest have become very important to us! It’s something that came totally unexpected but has been a great source of motivation.

Where do you see your sound evolving in the future?

To be honest, we don’t know, but we hope our sound will always evolve. We feel like we have just begun a journey but no idea where we’ll end up.

Tell us a little bit about your studio, are you using hardware or software? How do you get a track down?

Again we distinguish playing livesets and producing tracks.Starting with the livesetup: In the last three and a half years it underwent countless iterations. Starting with two laptops, a modular system, a bunch of controllers. Then a big step was to go dawless. Now there’s still the modular system, a drum machine, a box full of guitar effect pedals and everything comes together in a DJ- mixer. But there’s no piece of gear in our current setup that was there right from the beginning. It’s all replaceable. If you are interested in specific gear (manufacturers, models etc.), you can spot everything in one of our videos. We just decided that we didn’t want to name-drop certain brands or products – of course we like the machines we are using but we also see that there is a tendency in our scene to fetishize gear. You could argue that techno comes from technology – we would like to believe the term comes from ‘technique’… Ok, enough smart-assing.

When it comes to producing, our approach at the moment is fairly traditional. We are using some DAW, a bunch of plugins and sometimes some outboard gear or hardware synth. We haven’t figured out *the* perfect workflow yet and maybe that’s why we think, our sound is not that coherent. We have this utopic vision that we are able to generate tracks from playing our live setup. Seems so easy: just record the stems, do a little arranging, a little mixing, done! Didn’t work out for us, yet. In our case, playing live and producing tracks induces two completely different mindsets. We really like to dive in deep when producing and shape each sound until alleged perfection. Something we naturally are not able to do playing live. But we keep trying!

If there was one piece of production advice you could give people, your number one bit of advice that would help people, what would it be?

As our good friend Shia once said: ‘Just doooooeit’. Well not in a sense, that anybody can achieve anything because it’s so easy. But in a sense, that you can only find out what works for you by trying. We would say: don’t focus on gear, use what you have. Don’t take advice like ‘10 steps to become a super-producer’ or ‘highpass everything’ too seriously and use your ears. There are no shortcuts, take the time to develop an approach that works for you and f-ing doooooeit! 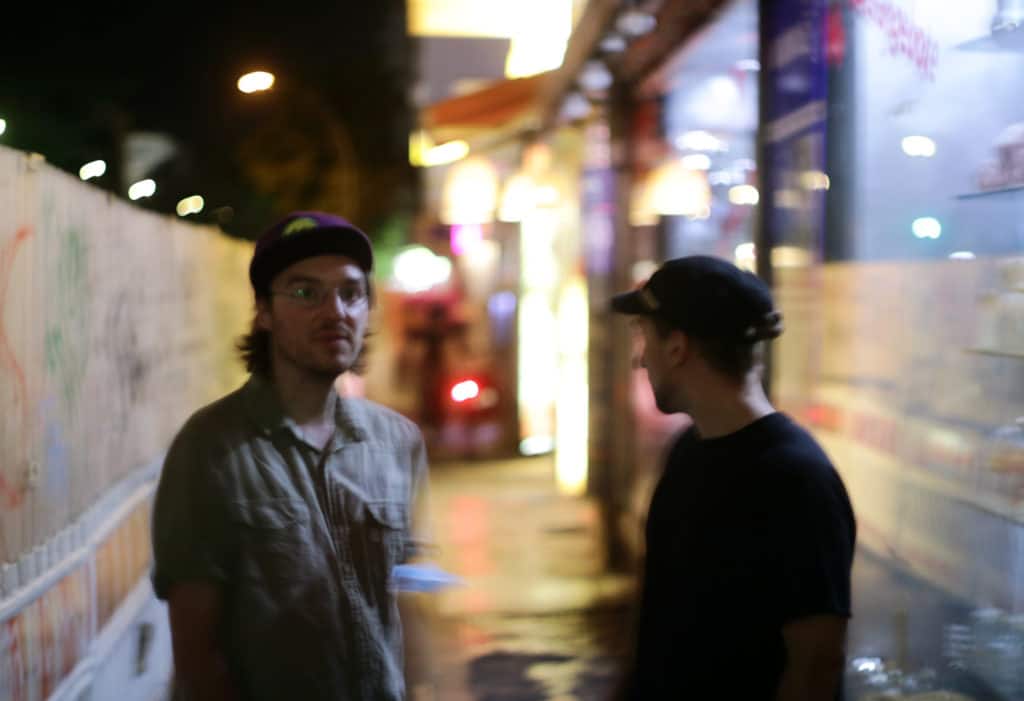 Are there any pieces of kit that are essential to your sound?

As mentioned before,there’s not a single machine in our setup that has not been replaced already. So, no. Nothing is essential. Obviously we need the machines to make the music that we make.
We are thankful to be able to afford those things and being able to take the time. We are very happy to do what we are doing. The machines we are currently using, work for us not because they are great instruments (not saying they aren’t), but also because of the time and thought we put into them, to learn how to use them. Again, technique beats technology.

For example there are two techniques that may be some kind of a recurring theme in both our livesets and studio productions: We mentioned using feedback and putting different effects inside the feedback loops. The second technique is synced volume modulation of reverberated signals. Sending any signal (e.g. a rhythmic pattern) into reverb and then sending the reverb into a tremolo that chops it into a rhythmic pattern again. Simple, effective, we love it! How about if we then send that signal back into the reverb… creating… feedback.

Do you have a favourite track of your own? And why?

Tricky question. We might like a track one day and hate it the next day. The fact that we are two people exponentiates this issue. So in general we try to wait for those moments when the planets align and we both like the same track at the same time. Then we put them on soundcloud and delete them the next day. On a more serious note: we are proud of anything that we are able to finish and put out in one form or another. Of course you don’t feel the same about a track every day. The tendency is that the more recent tracks play a bigger role for us because they are a better representation of the mood we are currently in. Also, more recent tracks feel more like progress compared to previous tracks. But that’s also a elusive assessment. So, long story short: We (don’t) like all our tracks (at least sometimes).

Can you clue us into any acts you are loving that other people might not know?

How do you see the state of the scene?

What are your goals for the next few years?

Where can we hear more from crouds? Tell us about any music you have out soon?

Keep an eye on Intumi Records, Molten Moods, RFR Records. And for more stuff like livesets and snippets, check our soundcloud and youtube.

Shoutout to our friends from Sonic Ground collective – an artist collective with emphasis on live performances and techno culture.