When Manley released what is ostensibly their version of the most venerable of the variable Mu compressor designs – the Fairchild 670 – it quickly became well regarded in the mastering and mixing rooms of the world.  You could amble into well-known mastering studios all over the world and more often than not find one of these boxes being used every day.  It is the ultimate glue box and that’s no over exaggeration. I mean… there will be people out there that don’t like what it does…but we are finding them and getting rid of them.  You take a mix and send it through it and without fail it will make it sound better.  A heady achievement for any piece of gear and the Vari-Mu is a master at it – smooth, musical and with a great tone.

The original Vari-Mu was an all-tube compressor design, as I mentioned it was based loosely around the original Fairchild design.  It has lots of nice sounding tubes and an action which itself is very gentle and musical.  You will get a lot of tone and natural musicality from these all-tube machines and it is that very use of tubes which also makes bagging one of the real hardware units so expensive.  That said – they are totally worth it.  This beast is great on tracks and instruments but it really shines on the mixbus and can certainly bring the kiss of life to your recording.

So how does the UAD software version rate? lets find out.

We’ve almost been in a golden age when it comes to Software Compressors. That might be over stating it a little, but when things have been so dire for so long, I’d say at least it’s getting better.  UAD’s 1176 & Fairchild 670, U-hes new one, Bootsies impressive work over on variety of sound and of course TokyoDawn with their amazing work, to name but a few,  some expensive and some entirely free… but all uniformly GOOD software compressors that are available now.  They are all useful and all pushing the art with new techniques and ideas driving things forward so we have some really useful tools in our box. Each compressor has a unique style and individual best usage and they are not all built equal, each can really offer different things to your music. Where does the Vari-Mu fit in?

What makes the Real Vari-mu unique and does the plug-in have it?

When it comes to compressors the Vari-mu is definitely not an all-purpose Swiss army knife.  The original machine has a personality, and it does its thing with subtle panache so will probably end up being used a lot. From warming up your bass to shaping your bass drum it has its unique sound to impart. Having said that, this compressor is unique because of what it does on your busses. In compress mode the ratio is kept real low, and you can get a subtle and inobtrusive gel effect on your track, neatly and very transparently gluing it all together with very few audible artefact’s.  It is the smoothest compressor I have ever heard, and the plug-in sits up there with the hardware when it comes to this transparency.  Put the unit into limit mode and your ratio can go up to around 20:1; but even at heavy gain reduction the unit really retains that smooth characteristic, although it is a lot more audible in the way it’s clamping down it still keeps it cool.   This is due to the nature of its variable Mu design, where the ratio will vary depending on how hard the signal is being hit.  This is really useful for keeping a strong and dynamic sounding mix when coupled with the mid side and wet dry features that UAD has included in the plug-in emulation.  That mid side operation itself is another aspect which turns a wonderful sounding plug-in compressor into something akin to a stereo spreader, as you can not only control the relative levels of the mono and the stereo signal but you can also have different compression settings suited to each – clamp down on those harsh transient in the middle whilst leaving your stereo open and airy…check.

It just works, subtle and musically controls your mix and after using this for a while those same words count for the plugin. Even in its more extreme settings there are no harsh or unmusical outbursts from the plugin. It is super cool under pressure and that above all else is what makes this one unique. Sure that’s not the best trait for all types of uses but on your buss – this is the real deal. 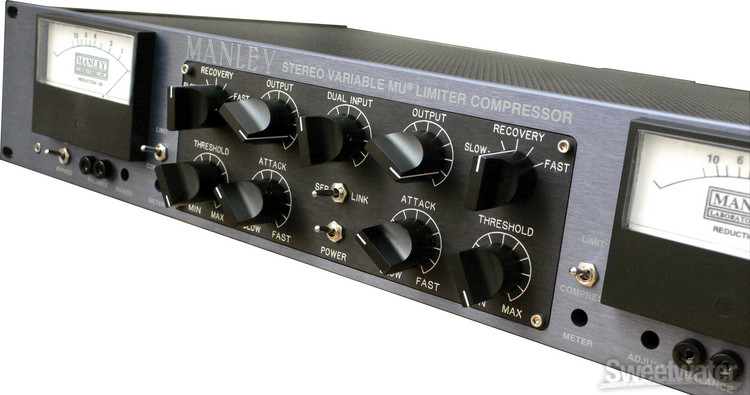 In terms of basic operation you get a tight set of controls but you can do a lot with what you get. There are two main modes of operation that you get, Compressor mode which gives you a soft 1:5 ratio of operation. This is great for the master buss, where you really just want to kiss the mix, control the dynamics and glue it all together subtly. Flick the unit to limit mode and you can push it a lot harder, but this is no brick wall but it can really chomp down onto a mix, really good for using in a wet dry mix to bulk up your sound or getting creative with.

One of the more unusual features is a very handy control on the front intended for calibrating the device properly against your input level. This can be really useful, because you can use & abuse it to ramp up the compression and make things a little more crunchy and hot. All within the realm of the Vari-mu sound that is – so don’t expect crushed madness, this is the wrong plugin for that. For example by increasing the operating level and increasing the internal head room you can have a hotter  signal coming in through the emulation before the plug-in begins to compress. Allowing the painstakingly modelled internal components to get a little warmer!

Detail of the emulation

Universal Audio have been working hard on their next level emulation of analogue circuits in the past few years. They are emulating circuits down to a component level, capturing the fluctuations and instabilities, those very distortions and movements which impart subtle character and warmth to our audio.  UAD’s recent offerings have been the cream of the crop in the digital world, offering a nuance and tone on top of an accuracy in basic function which really gives their software versions of some incredible hardware a very respectable similarity in the sonics even to the most stalwart hardware lovers.  With the Vari-Mu plug-in we see that expertise coming to fruition again, this thing sounds close to the hardware, I mean really close, it really is lovely, and I really think it helps make the function of the plug-in so smooth and musical. That’s what I think designers realised in the past 5 years or so, it was not just getting the design of the plugin right, but also getting the nuances right as they all add up to have a massive effect on how people perceive the basic design to sound.    So yes, the emulation is as good as it gets reaching toward the quality of the hardware unit itself.  There is still a difference but its getting to the stage now where you could debate if this was down to differences between the hardware modelled and the unit your comparing it to.  The end result is a tangible quality that’s small but all important, don’t let differences put you off.  This is a great plug.

Verdict – it is hard to make this sound bad, even with levels of gain reduction you would avoid like the plague with other software compressors! In that alone it is super-close to the hardware. More importantly, when we review products, we make sure to spend time working with them before we give a verdict.  Since I got this a few months back it has been my most used compressor – period.  It has smoothness, it has subtle tone and character, it is more than just the function of the compressor design. UAD have modelled the components in great detail. This VST equals more than the sum of its ones and zeros.

CHECK IT OUT AND BUY